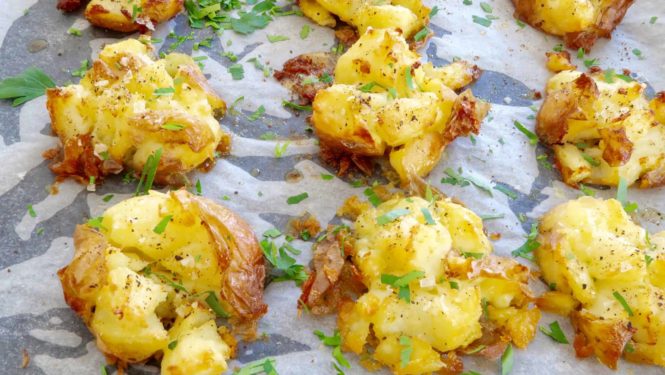 Crispy Smashed Roast New Potatoes are a perfect way to cook potatoes with an ultra crispy skin, crunchy nooks, and crannies with soft, buttery potato on the inside.

Next up drizzle the potatoes with olive oil and season with salt and pepper. Throw them into a hot oven and get ready for some of the best potatoes you’ll ever have eaten.

They’re golden brown and all the pieces of skin and potato have turned wonderfully crispy whilst the potato inside remains soft and fluffy.

Everyone loves these and they are the first to go at any barbecue we have.

What Type Of Potatoes Should I Use

Select potatoes that are roughly the same size ( not too big), and potatoes that are starchy as they become soft and fluffy when cooked. Starchy potatoes don’t hold their shape well which makes them great for squashing.

pontiacs – considered a good all-rounder ideal for boiling, baking or frying
coliban – a starchy white fleshed potato
desiree – are both waxy and starchy
russet – has a white, dry and starchy flesh
yokon gold – starchy, and great for baking, mashing or deep frying

When you squeeze your potatoes try to create as many rough edges as possible as these are the bits that get tinged with golden crispiness which is exactly what you’re after.

The oil and butter seep into these nooks and crannies and creates the crispiness.

Numerous recipes call for the potatoes to be squashed flat which creates just one flat crispy disc. For us we prefer all the highs and lows of crispy skin and potato, which is why we squeeze the potato so they’re all gnarly and knobbly.

It doesn’t matter if bits of potato break away, you just squeeze them back together and reshape them. Too easy!

Squash, Butter and Bake – sounds like the name of a song, but it’s really the key to making the best crispy potatoes you’ve ever had! 😄

Roast New Potatoes with Garlic and Anything Else You Can Think Of.

Crispy Smashed Potatoes are fabulous on their own, or set up a smashed potato bar for your next gathering offering guests a choice of one, or all of the suggested toppings below.

Potatoes are the ultimate all-rounder, they’re fabulous baked or grated for the yummiest Crispy Hash Browns or made into Pommes Anna as a delicious accompaniment to a great steak or what about our Whipped Creamy Mashed Potatoes to play alongside your Thanksgiving turkey. Any way you prepare potatoes they can and very often are the star of the show.

How Far Ahead Can I Make Crispy Smashed Roast New Potatoes

You can prepare your smashed potatoes up to 2 days ahead of cooking them. Boil the potatoes, drain them and allow them to sit in the colander for 5 or so minutes to release more steam then squeeze and shape them.

If you’ve enough room in your fridge you can place them onto your baking tray ready to drizzle oil and season them just before popping the tray in the oven.

If not, store the potatoes in an airtight container once cold and place a sheet of hand towel between each layer.

Don’t forget to let us know what you thought when you make these fabulous Crispy Smashed Roast New Potatoes in the comments below.

Crispy smashed potatoes isn't so much a recipe, as a technique. Use as many potatoes as you need, and boil, smash and bake away!

One of Coopers favourite past times is eating pegs, if one falls on the ground…….. it’s gone