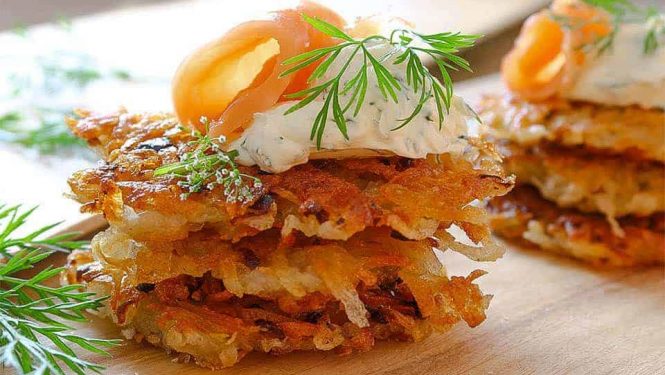 Crispy hash browns are a favourite item on the breakfast and brunch menu in our homes. Fried, golden brown shreds of potato mixed with a little onion and seasoning and fried till crispy and crunchy is our idea of a great hash brown.

Breakfast on the weekends has the luxury of time to serve up a train smash breakfast and these little beauties are about to make you rethink going out for breakfast.

Potatoes are such a versatile vegetable, lending themselves to potato croquettes, fried potatoes, roasted potatoes, boxty, potato waffles, rösti and tater tots all are delicious, however the hash brown, otherwise known as rösti stands alone for it’s versatility.

Equally at home on the breakfast menu, accompanying a steak or as a canape topped with a variety of ingredients, hash browns add the perfect crunch and who doesn’t like crunchy potatoes.

Starchy potatoes are recommended for making hash browns as the grated potato sort of moulds together allowing the outside to be crispy and golden, and slightly fluffy inside.

They’re high in starch, have a floury texture and are absorbent. They also release a milky, starchy liquid when cut.

Wringing out the moisture

It is super important to wring the potatoes out once you’ve grated them. Wringing them out removes a lot of starch and moisture leaving the potatoes shreds dry and separate.

Use a box grater, or food processor to grate the potatoes, then place the grated potato in a sausage shape in the middle of a clean tea towel. It’s easier to do this in batches of a couple of handfuls at a time. Twist both ends of the tea towel and squeeze the towel. It helps to have an extra pair of hands in the kitchen for this job.

Really twist the towel and a load of moisture will be released leaving you with dry separate shreds which makes for a perfect hash brown.

Once you have rung out the potatoes they will start to change colour to a ‘pinky colour’. This is simply the air oxidising the potato and doesn’t affect the taste of the cooked hash brown.

You can peel the potatoes ahead of time and place the whole submerged potatoes into water. Add a squeeze of lemon juice or a dash of vinegar into the water to stop them oxidising.

As these hash browns have no egg the trick to getting them to stick together is using cornflour. By mixing the potato, onion, salt and pepper then sprinkling over the cornflour as you lift and shake the potatoes, lightly aerates the mixture allowing the cornflour to be evenly distributed.

Cornflour creates a ‘glue effect’ as there is still some moisture in the potatoes. Grate it, toss it and cook it. Too easy!

If you use maize cornflour, rather than wheaten cornflour the hash browns become gluten free. Win, Win!

Heat your dry frypan over medium to high heat for 2-3 minutes. Then pour in a couple of tablespoons of peanut or vegetable oil into the pan and swirl it about to evenly coat the base of the frypan.

Turn the heat off and allow the pan to cool. If you think of the pan as having a porous surface and by heating the pan and then coating with oil the porous holes are filled and the surface becomes less prone to sticking. Your pan is now seasoned and ready to fry away.

Always remember to have your pan heated (medium heat is all that is required) and then add a lick of oil and the ingredients to be fried. Allow the ingredient to cook for a minute or two before trying to move it, this allows the ingredient to set and it will release from the pan.

How to serve crispy hash browns

Crispy hash browns can be served so many ways. Some of our favourites are:

Scroll to the bottom for the Crispy Hash Browns recipe

click on the link for the recipe…..Creamy Muffin Tin Potato Stacks

click on the link for the recipe…..Easy Crispy Smashed Potatoes

click on the link for the recipe…..Easy Crispy Hasselback Potatoes

click on the link for the recipe…..Potato Galette with Duck Fat and Caraway

What’s your favourite hash brown recipe? We would love to hear from you in the comments below when you make the Crispy Hash Browns.

Crispy, golden potato shreds held together with a little cornflour are super easy to make. They're perfect for breakfast or brunch and still stay crispy even when they're cold which makes for a perfect fridge snack!