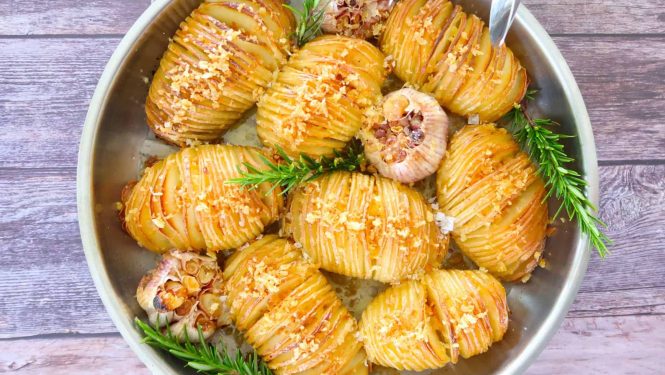 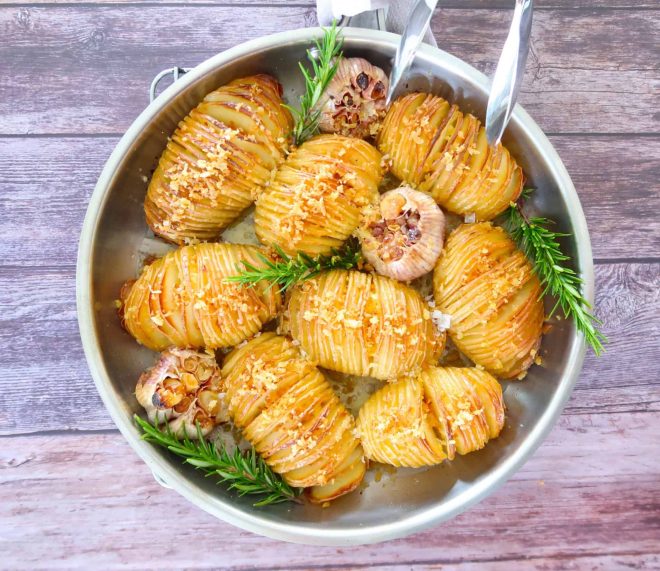 Easy Crispy Hasselback Potatoes are a great potato side. Drizzled with oil, seasoned, and into the oven till the slices begin to separate and change colour. Out of the oven then slathered in butter and buttery panko crumbs, then another bout in the oven to finish crisping. We love to bake these with whole knobs of garlic to smear over the potato leaves. Delish!

Roasting whole knobs of garlic makes the garlic rich and velvety. The flavour is sweet and mellow, not sharp and pungent as it is when raw. Simply break the knobs up into cloves when roasted and smear a little on each slice of your hasselback potato.

Our friend Carol grows magnificent organic garlic which is what we have used here. None of this garlic that is bleached white for us thanks!

We used large, unpeeled, even sized washed potatoes for our dish which weighed around 190 g  (7 ounces) each. You can of course use smaller potatoes and simply adjust the cooking time.

The trick to making your hasselback into accordion like even slices is to sit your potato on a large kitchen spoon. The sides of the spoon stops you slicing all the way through and gives an even depth for the cut of easy crispy hasselback potatoes.

We begin roasting these potatoes with oil and season them. After an hour of  roasting you remove them from the oven and liberally brush with butter which turns them golden brown. To finish, you toss some melted butter through some panko breadcrumbs and sprinkle the potatoes with them. They turn all golden and crunchy and really bring a lot to the potato party. 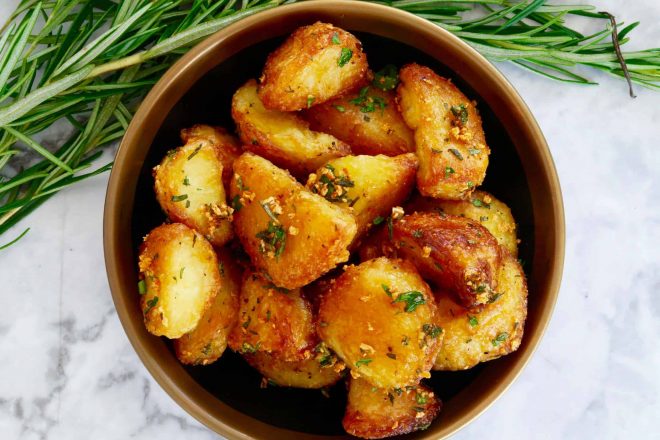 Crispy Roast Potatoes. Who doesn’t like golden brown chunks of potato, crisp and crunchy on the outside and soft on the inside. They’re roasted in a garlic and rosemary infused extra virgin olive oil, then when golden they’re tossed in the fried garlic and rosemary that infused the oil, and dusted with salt flakes 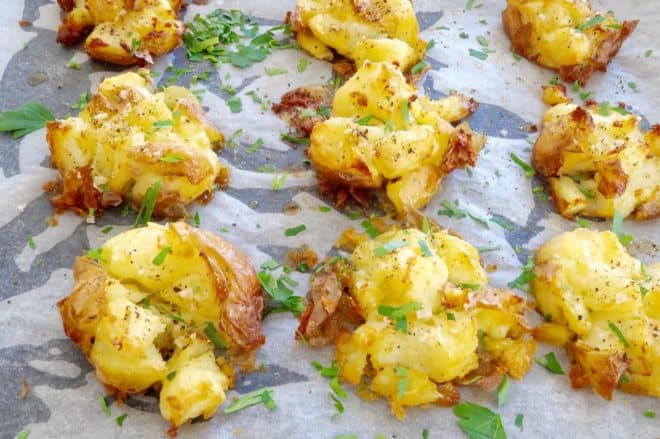 Crispy smashed potatoes are a perfect way to cook potatoes with an ultra crispy skin, crunchy nooks and crannies and soft buttery potato on the inside. Everyone loves these and they are the first to go at any barbecue we have. 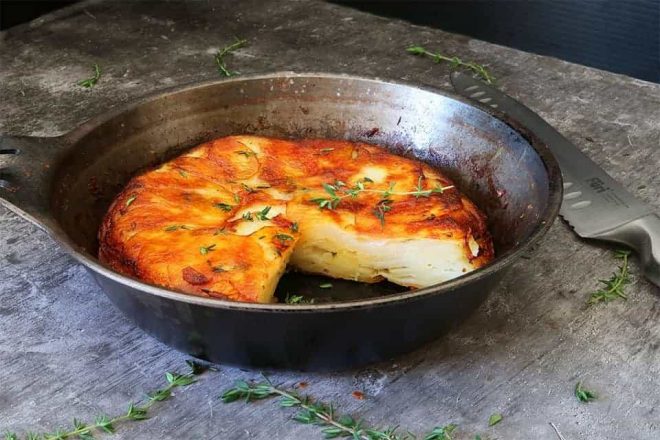 Pommes Anna is a classic French recipe that takes the humble potato into a league of its own. It’s such a decadent, and elegant dish that’s rich with butter, and potatoes that almost melt in your mouth.Ultra thin slices of potato, layered and brushed with garlic butter, sprinkled with fresh thyme leaves, dusted with grated parmesan and seasoned with salt and pepper. The exterior becomes all golden brown and crisp, while the centre potato slices absorb the glorious garlicky butter, thyme and parmesan, and turns silky soft. What’s not to like.

Have you ever tried hasselback potatoes or roasted garlic? We would love to hear from you in the comments below.

Easy Crispy Hasselback Potatoes are a very easy potato dish to prepare. It is not so much a recipe as a technique. The technique may look lengthy but basically you are taking some potatoes and slicing them, drizzle with a little oil, season, bake, remove and brush with melted butter, bake a little longer, remove and sprinkle with buttered panko crumbs and bake a little longer till golden.  Make as many or as few as you like. Enjoy!

Don’t you just hate it when you go out for a drink, put your foot in it and fall asleep. 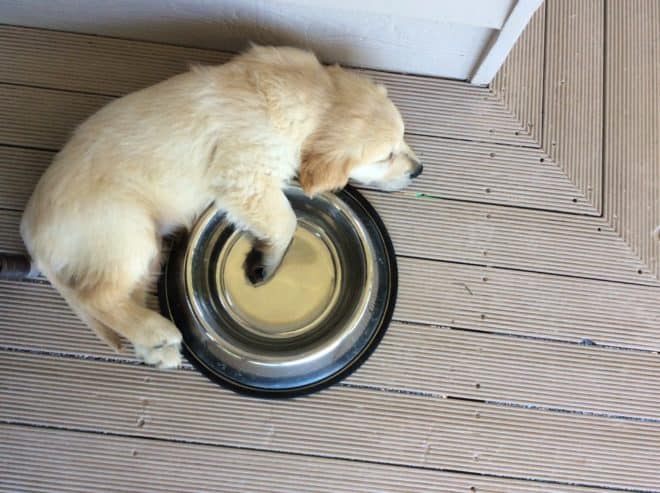