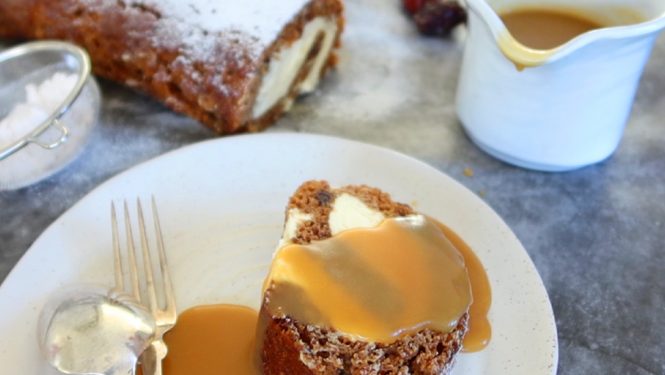 Our Sticky Toffee Pudding has been given a facelift, served as a rolled caramel toffee flavoured sponge that’s filled with butterscotch infused cream and finished with a drizzle of a silky smooth butterscotch sauce.

This is a light as a feather sponge cake with a mixture of butter, brown sugar, eggs and flour. The genius of this dessert is the dates which add a rich, sticky sweetness without making it heavy.

This is a dessert that everyone thoroughly enjoys. It’s incredibly moist, filled with softly whipped cream that has some of the butterscotch sauce folded through, then topped with the remaining heavenly rich butterscotch sauce. Delicious!

This dessert is best eaten within 3 days, but that’s ridiculous because it never lasts that long! 😜

Is Figgy Pudding The Same As Sticky Toffee Pudding

Figgy Pudding and Sticky Toffee Pudding are often confused so let’s clear this quandary up once and for all.

Australians and New Zealanders like to call this dessert ‘sticky date,’ whereas the rest of the world calls it ‘sticky toffee’, but whatever you call it it’s a knockout dessert.

Thanks To The Unknown Author

This recipe was one our Mum Noela would often make. Mum’s recipe was laminated on a bright green piece of paper with no clue as to the origin. A quick scout around the net turns up a request from someone wanting the recipe from The Women’s Weekly. Someone responded with the exact measurements and wording of this recipe.

We’re not sure if the recipe we use that comes from The Australian Women’s Weekly magazine is originally their recipe by way of rolling the cake with cream, but in our books, it’s a winner! Whoever the recipe belongs to deserves a culinary medal.

Rolled Sticky Toffee Pudding with Butterscotch Sauce is so simple to prepare, bakes in next to no time and we’ve yet to see anyone knock back a serve.

How To Make The Sticky Toffee Pudding

Make The Butterscotch Sauce And Filling

What Nationality Is Sticky Toffee Pudding?

Although the exact origins of Sticky Toffee Pudding have been lost in time, it is widely believed that the pudding was first made in England when it was cooked at a hotel in Lancashire in the 1940’s. The Story goes that 2 Canadian servicemen shared the recipe with the manager of the hotel a woman named Patricia Martin. Now how the Canadian’s came by the recipe is another story for another day. 😩

Surprisingly there are over 1500 date varieties in the world and the king of dates is perhaps the ‘medjool’ with it’s typical caramel-like taste and a soft, chewy texture whereas regular dates commonly called Deglet Noor, are usually smaller and have a firm flesh and a sweet, delicate flavour.

However the dates we used to make this Sticky Toffee Pudding were just supermarket dried dates from Turkey, found in the baking aisle. At just a few couple of dollars a bag they’re a bargain and do the job nicely.

Should Dates Be Hand Chopped

We like our Quick Sticky Date Roll with Butterscotch Sauce to have a little texture so we hand chop the dates. You can use a food processor to make this super easy dessert but it will make a puree of the dates and not give you any texture. The good thing is it will taste exactly the same as the hand-chopped method. There’s a bonus of saving 5 or so minutes by using a food processor instead of hand chopping. So if you’re short on time feel free to chop and mix in a food processor.

For all the times we’ve made our Rolled Sticky Toffee Pudding we can’t recall a time that it hasn’t cracked at least a little. So don’t be too disappointed if yours has a fine crack or three, as it really doesn’t affect the eating at all.

Once you’ve rolled the Sticky Toffee Pudding use your hands to smooth the roll by rubbing your hands firmly along the length of the paper a few times. This tends to ‘knit’ together any sign of cracking and then finish with a dusting of icing sugar. Enjoy!

Don’t forget to rate this recipe and let us know what you thought when you make this fabulous Rolled Sticky Toffee Pudding with Butterscotch Sauce in the reviews below.

This dessert needs to be in your repertoire. It's ridiculously easy to make and tastes amazing.