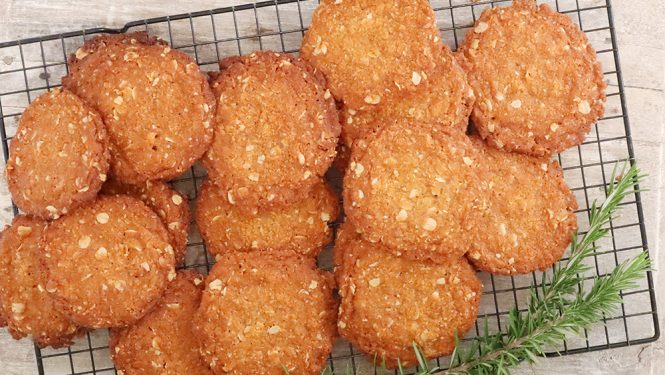 Anzac Day Biscuits or Anzacs for short are golden, coconutty, oaty, buttery and sweetened with caramel flavoured golden syrup. They’re crisp, crunchy and super easy to make, and the flavour and smell are devine!

Anzac Day Biscuits are incredibly popular across Australia and New Zealand and are to be found in every supermarket, and many cafes.

Should Anzac Day Biscuits Be Crunchy or Chewy

There is ongoing debate as to everyones opinion on what an Anzac biscuit should taste like. Should they be crisp and crunchy, or soft and chewy.

This recipe falls into the crisp and crunchy Anzac biscuit category. That is an Anzac that’s crisp all the way through.

Traditional or old fashioned rolled oats is what you need to make these Anzacs with as the oats are flat and flakey. What you don’t want to use are quick cook, or instant oats as the shape, texture and cooking times vary from traditional, or old fashioned oats.

In Australia we have a local brand made by CSR, who have been making golden syrup here since 1855. It’s a golden-red coloured syrup with a smooth caramel toffee taste.

Lyles golden syrup is produced in the U.K and is available in the USA. Both syrups are available through Amazon and in the international food sections of many supermarkets.

Our preference is for the CSR brand as it has a deeper caramel flavour compared to the Lyles brand.

Using white sugar produces a snappier, crunchy biscuit as it absorbs moisture in the dough. If we were to use soft brown sugar we would end up with a soft and chewy Anzac.( Anzac Biscuits for those that like them soft.)

What Is The Best Way To Store Anzac Biscuits

Store your Anzacs in an airtight container with paper towel between the layers to absorb any moisture. Anzacs will last for 1 week, but if the go a little soft pop them in a pre-heated oven for a few minutes, then allow them to cool on a cake rack.

Anzacs are baked everyday by home cooks, but perhaps no more so than to commemorate Anzac Day, April 25th.

What Is The Story Behind The Anzac Day Biscuits

Anzac biscuits are a favourite Australian biscuit, the recipe has been floating around prior to 1915 and became popular when the word Anzacs came into being.

Anzacs stands for the Australian and New Zealand Army Corps when both countries joined forces for training in Egypt. The acronym was coined in 1915 as troops trained for the battle of Gallipoli during World War 1.

Loved ones and women’s groups at home started baking Anzacs to both send to their loved ones and to raise money at home for the war effort. The received biscuits were a real morale booster for soldiers knowing that they had been baked with love.

Because the ingredients did not spoil over the time the biscuits took to arrive they were often ground up by the soldiers and eaten as a porridge type meal known as ‘trench porridge’.

However the biscuits that were sent to soldiers back then were a far cry from the Anzac biscuits of today. Over time the recipe has evolved to todays addition of coconut, less flour and more golden syrup.

The Significance of Rosemary

Rosemary is a scented herb believed to strengthen the memory, and so it became a symbol of remembrance. It has become associated with the Anzac tradition of being loyal to one’s mates, and active in honouring the memory of fallen and departed comrades.

Don’t forget to rate this recipe and let us know what you thought when you make these fabulous Anzac Day Biscuits in the reviews below.

These super easy and delicious Anzac Day Biscuits are quick to make. Depending on the size of your scoop or spoon you should get around 24-30 biscuits.